Mechanisms of Balancing Immunity
“BIM product induces the activation of Th1 and Th17 cells, but not Th2 cells”

Th1 and Th2 cells
Immune system is an important system for protection body from infections and destroying cancer cells. The immune system consists of a sophisticated array of cells that have developed to recognize and eradicate a wide variety of microorganisms and cancers. T lymphocytes are important players in this process. They can be stimulated by peptide antigen presented on major histocompatibility complex (MHC) molecules expressed on antigen-presenting cells (APCs). Upon T cell stimulation, they secrete IL-2 and express surface IL-2 receptors. Binding of IL-2 to its receptors, through the autocrine mechanism, induces clonal expansion of T lymphocytes. The activated T lymphocytes are then subsequently differentiated to the effector cells for generating immune functions.

T helper cells (also known as Th cells or CD4+ lymphocytes) are a sub-population of T lymphocytes that play an important role in establishing and maximizing the capabilities of the immune system. These cells have no cytotoxic or phagocytic activity. They cannot kill infected host cells or pathogens. T helper cells, however, are involved in activating and directing other immune cells to function. They are essential for induction of antibody production by B lymphocytes and determining B cell antibody class switching. The T helper cells also involve in the activation and growth of cytotoxic T cells (also known as Tc cells or CD8+ lymphocytes) for killing of virus infected and cancer cells. In addition, T helper cells can activate and maximize bactericidal activity of phagocytes such as macrophages, monocytes and granulocytes. It is this diversity in function and their role in influencing other cells that gives T helper cells their name.

T helper (Th) cells express the CD4 molecule and, after activation, can differentiate into at least two subsets, Th1 and Th2 cells (Fig. 1). The Th1 and Th2 cells have different function and produce different cytokines. Th1 cells are important for the eradication of intracellular pathogens, including bacteria, parasites, yeasts and viruses. The hallmark cytokines of Th1 cells is IFN-

which can activate microbicidal activity as well as cytokine production in macrophages. This cytokines also involve in the activation of CD8+ lymphocytes and NK cells which play major role in destroying cancer cells. TNF-

, a potent pro-inflammatory cytokine, was also demonstrated to be produced by the Th1 cells. The primary role of TNF-

is participating in the regulation of immune cells. TNF is able to induce inflammation, to induce apoptotic cell death, and to inhibit tumorigenesis and viral replication. Dysregulation of TNF production has been implicated in a variety of human diseases, as well as cancer. Other cytokines, such as IL-2, tumor necrosis factor-

or lymphotoxin) and IL-10 have also demonstrated to be Th1 cytokines, but none defines this lineage as clearly. It is note that IL-2 is classically associated with Th1 cells, but this association may be misleading; IL-2 is produced by all helper T cells early in their activation. A Th1 response is often accompanied by the production of complement-fixing antibodies of the IgG2a isotype, as well as the activation of natural killer (NK) cells and cytotoxic CD8+ T cells expressing IFN-

and perforin. Taken together, the activation and induction of Th1 cells is of important for generation of a powerful cell-mediated immunity. In contrast to the Th1 cells, Th2 cells produce different type of cytokines. After activation, Th2 cells secrete cytokines IL-4, IL-5 and IL-13 and can activate mast cells and eosinophils. Depending on their secreted cytokines, the Th2 cells function mainly to mediate humoral immunity, eradicate helminths and other extracellular parasites. These cells also mediate allergic and atopic manifestations, which is in keeping with findings that Th2-derived cytokines can induce airway hyperreactivity as well as the production of IgE. Both Th1- and Th2-specific cytokines can promote growth or differentiation of their own respective T-cell subset, but additionally might inhibit the development of the opposing subset (Fig. 1).

In conclusion, Th1 cells involve in mediate cellular immunity responsible for killing intracellular pathogens. The Th2 cells, in contrast, produce cytokines which are associated with the promotion of humoral immunity and of IgE and eosinophilic responses. In excess, Th2 responses will counteract the Th1 mediated microbicidal action. The optimal scenario would therefore seem to be that humans should produce a well balanced Th1 and Th2 response, suited to the immune challenge. 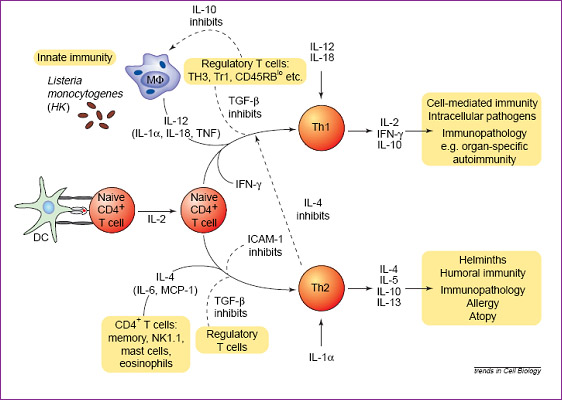 Figure 1:
Regulation of T helper cell responses. Cytokines are major inducers of Th1 and Th2 subset development. Antigen-presenting cells (APCs) or a specific APC subset (e.g. distinct dendritic cell subsets), in part as a result of the cytokines that they produce, can induce the development of Th1 or Th2 cells. Naive CD4+ T cells can develop into Th1 cells responsible for cell-mediated immunity in response to interleukin 12 (IL-12). Th1 development is dependent on IFN-

, and maintenance of phenotype depends on stimulation in the presence of IL-12 and IL-18. Development of Th1 responses can be antagonized directly by IL-4 and indirectly by IL-10, which inhibits the production of inflammatory mediators such as IL-12 and IL-18 from macrophages and/or dendritic cells stimulated by the innate immune response. Th2 cells, dependent on IL-4 to differentiate, have been implicated in allergic and atopic manifestations, and in addition, through their production of IL-4 and IL-10, have been suggested to play a role in tolerance: specifically, it has been suggested that a Th1-to-Th2 switch might prevent the development of organ-specific autoimmune pathologies. In the past year, it has become clear that distinct subsets of regulatory T cells are responsible for regulating both Th1 and Th2 responses and preventing the development of immune pathologies. A common feature of many of these regulatory T cells is that their function is at least in part due to the action of transforming growth factor beta (TGF-

); this would be in keeping with the ability of TGF-

Th17 cells
As was mentioned earlier, differentiation of naive CD4+ T lymphocytes into effector T helper cells is initiated by engagement of their T cell receptor (TCR; the receptor for antigen expressed on T lymphocyte surface) (signal 1) and costimulatory molecules (signal 2) expressed on antigen presenting cells (APC) in the presence of specific cytokines produced by the innate immune system upon encounter of particular pathogens. Cytokine IFN-

and are indispensable for clearing intracellular pathogens. In contrast, IL-4 (produce by APC) triggers the differentiation of Th2 cells. Th2 cells are key in organizing host defense against extracellular pathogens and in helping B cells to produce antibodies. The initial source of the differentiation factors for both Th1 and Th2 cells are cells of the innate immune system responding to microbial antigens, parasitic antigens, or allergens. However, the effector cytokines that are subsequently produced by Th1 and Th2 cells (i.e., IFN-

and IL-4) can potentially feed back to amplify Th 1 and Th2 cells and further enhance differentiation of the respective T cell subset. Moreover, IFN-

and IL-4 antagonize each other on different levels, and thus Th1 and Th2 development is considered mutually exclusive. Over the years, this Th1/Th2 paradigm of T helper cell differentiation helped explain many phenomena in adaptive immunity. Recently, the Th1/Th2 paradigm has been expanded, following the discovery of a third subset of effector Th cells that produce IL-17. This new-discovered T helper cells subset was designed as Th17 cells.

Upon activation, the Th17 cells exhibit effector functions distinct from Th1 and Th2 cells. Th17 cells produce cytokines IL-17 (also called IL-17A), IL-17F, IL-22 as well as IL-21 which are different from those produced by Th1 and Th2 cells (Fig. 2). The primary function of Th17 cells appears to be the clearance of pathogens that are not adequately handled by Th1 or Th2 cells. The cytokines produced by Th17 cells allow Th17 cells to communicate with a wide variety of immune and nonimmune cells. The IL-21 (which is produced by Th17 cells) acts on other immune cells such as B cells and feeds back to further amplify Th17 responses. Other cytokines produced by Th17 cells, including IL-17, IL-17F, and IL-22, have broad effects on many cell types and induce the production of proinflammatory cytokines and chemokines to attract neutrophils to the site of inflammation and antimicrobial peptides to strengthen host defense directly. However, up to now, the precise functional mechanism of Th17 cells, in vivo, is still mysterious. 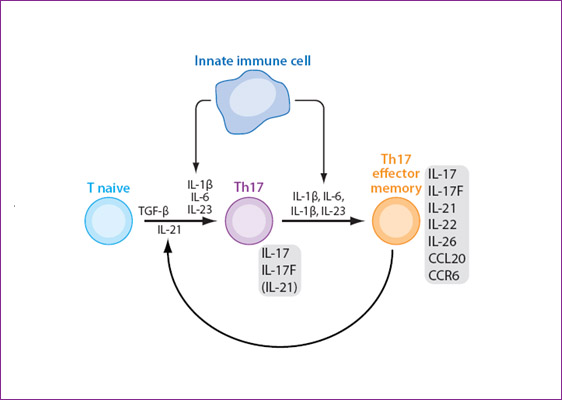 Effect of BIM on Th1 cells
IFN-g and TNF-

comparing to the placebo control group (Fig. 3). The up-regulation of IFN-

indicating that BIM product can activate the Th1 polarization in vivo.

Effect of BIM on Th2 cells
Upon activation, Th2 cells secrete cytokines IL-4, IL-5 and IL-13. The effect of BIM product on the Th2 cytokines were then determined. As shown in Figure 4A, no effect of BIM on IL-4 was observed. In our experiment, in fact, IL-4 could not be detected in culture supernatants of PBMC either in un-stimulation or anti-CD3 mAb stimulation conditions. In contrast, decreasing of IL-5 and IL-13 production was observed in subjects receiving BIM comparing to the control group (Fig. 4 B and C). In addition to IL-4, IL-5 and IL-13, the cytokines IL-1, IL-6 and IL-10 were described as the Th2 cytokines. We then determined the effect of BIM on these cytokines. It was found that the BIM product has no effect on either IL-1, IL-6 and IL-10 (Fig. 5 A, B and C). These results indicated that BIM product has no effect on the induction of Th2 cells activity and confirm the previous results that BIM stimulate the Th1 pathway. 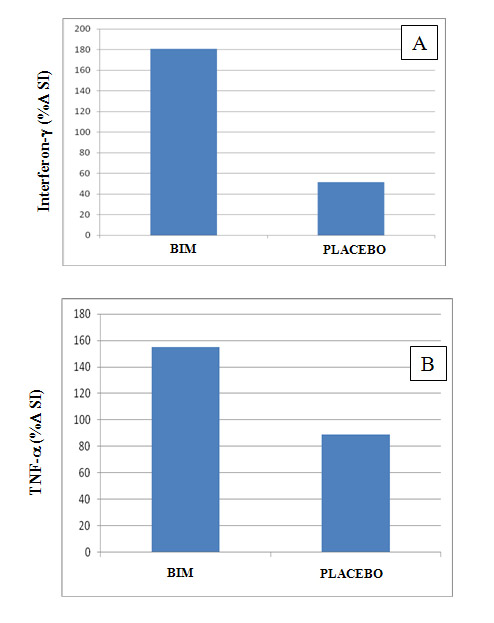 (B) production in PBMC isolated from subjects receiving BIM product and placebo (n=5) upon TCR activation. 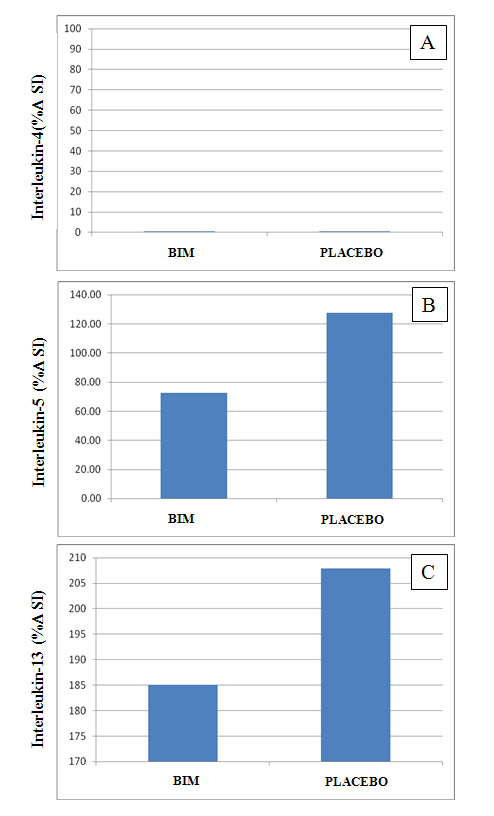 Figure 4:
Comparison of IL-4 (A), IL-5 (B) and IL-13 (C) production in PBMC isolated from subjects receiving BIM product and placebo (n=5) upon TCR activation. 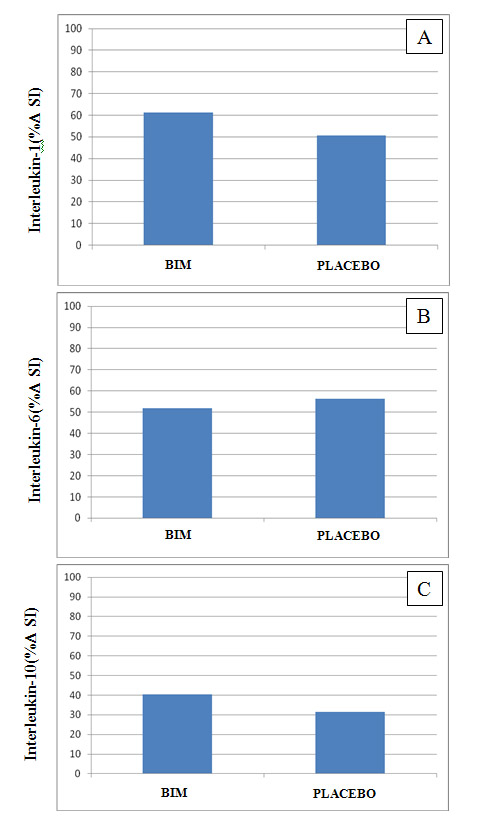 Figure 5:
Comparison of IL-1 (A), IL-6 (B) and IL-10 (C) production in PBMC isolated from subjects receiving BIM product and placebo (n=5) upon TCR activation. 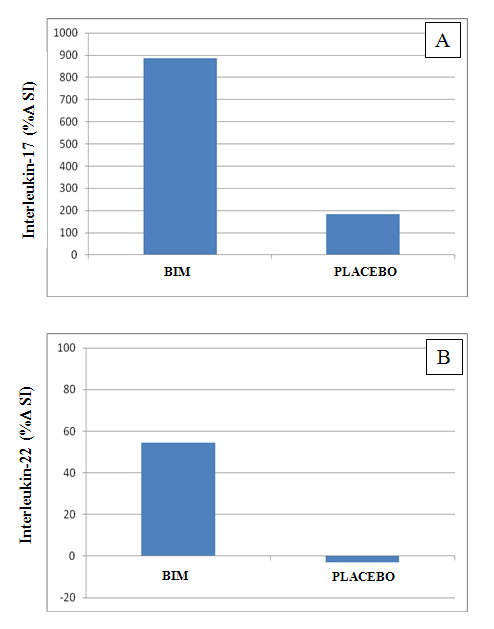 Comparison of IL-17 (A) and IL-22 (B) production in PBMC isolated from subjects receiving BIM product and placebo (n=5) upon TCR activation.

After activation, T helper cells (Th cells or CD4+ lymphocytes) differentiate into Th1 or Th2 effector subsets. These two types of cells produce distinct profiles of cytokines and regulate different immune responses. Th1 cells are described to be responsible for mediating cellular immunity, whereas the Th2 cells mediate humoral immunity and associate with hypersenisitivity. Recently, a new Th subset, Th17, was discovered and demonstrated to be involved in body inflammatory responses.